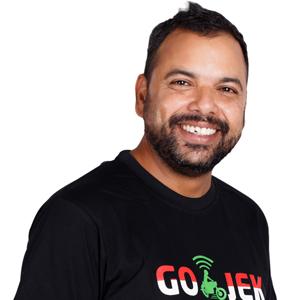 As Group Chief Technology Officer of one of the most forward-thinking companies across Southeast Asia in Gojek, Ajey Gore is constantly operating at the leading edge of technological innovation.

In spearheading technology efforts, perhaps Ajey Gore's leading achievement has been scaling Gojekâs transaction volumes and supporting infrastructure from less than one million daily bookings to more than 200 million orders per month.

Such is the speed of innovation however, transformation efforts have continued at pace across the entire organisation.

Gore and his team also designed and rolled out a data flow backbone on Apache Kafka - an open-source stream-processing software platform - to unify a microservices architecture which scaled from 5,000 daily events to more than 100 million.

This was in addition to driving the design of a performance management framework for engineering, supported by the roll-out of an internal product to scale implementation across the Gojek product group through Snowflake.

Goreâs influence has also extended to initiating and driving the creation of a platform group to manage cloud infrastructure and physical data centres through a unified internal product, Kernel.

The executive leader also âpersonally wrote and open sourcedâ a solution which is used across both Gojek and multiple, large external organisations.

Running and executing multiple innovation projects simultaneously has allowed Gojek to sustainably deliver services across multiple countries in Southeast Asia, with the business now managed over 200 million orders each month, having started from 500 orders per day in early 2015.